Thank you for your interest in AL Advantage Assisted Living Software.
We’re here to answer your questions.

But the judges sent the case back to determine if other parts of the federal health care law can stand without the mandate.

WASHINGTON — A federal appeals court on Wednesday struck down a central provision of the Affordable Care Act, ruling that the requirement that people have health insurance was unconstitutional.

But the appeals panel did not invalidate the rest of the law, instead sending the case back to a federal district judge in Texas to “conduct a more searching inquiry” into which of the law’s many parts could survive without the mandate.

The 2-1 decision, by a panel of the United States Court of Appeals for the Fifth Circuit in New Orleans, left the fate of the nearly decade-old health law in limbo even as access to health care has become a central issue in the presidential race. Republicans, for whom a decision to throw out the law heading into the presidential election year could have been a political nightmare, seemed relieved, while Democrats issued a flurry of statements emphasizing that the law was still in grave danger.

The ruling was issued almost exactly a year after Judge Reed O’Connor of the Federal District Court in Fort Worth struck down the entire law, saying the individual mandate could not be severed from the rest of the Affordable Care Act because it was “the keystone” of the law, essential to its regulation of the health insurance market. With Judge O’Connor now facing a time-consuming assignment from the appellate court, the case is unlikely to be resolved before next year’s presidential election.

But Xavier Becerra, the California attorney general who led 21 states that intervened in the case and argued to preserve the law, made clear that he planned to challenge the appeals court decision by petitioning the Supreme Court to take the case.

“For now, the president got the gift he wanted — uncertainty in the health care market and a pathway to repeal,” Mr. Becerra said in a call with reporters on Wednesday night.

In a statement that showed just how consequential the issue is for him, President Trump tried to appeal both to opponents of the law and voters concerned about losing their health care. He described the ruling as “a big win for all Americans,” but said it would not alter the health care system. Mr. Trump also said he wanted to protect people with pre-existing conditions, as the Affordable Care Act that he has repeatedly sought to kill does.

“Providing affordable, high-quality health care will always be my priority,” he said.

Some 17 million Americans could lose the coverage gained through the Affordable Care Act if the law were thrown out, more than 50 million people with pre-existing medical conditions could again be denied health insurance and insurers would no longer have to cover people up to age 26 under their parents’ plans.

A central question in the case was whether the Affordable Care Act’s “individual mandate” requiring most Americans to buy health insurance or pay a penalty became unconstitutional after Congress reduced the penalty to zero dollars as part of the tax overhaul bill enacted in 2017. When the Supreme Court upheld the mandate in its landmark 2012 ruling that saved the law, it was based on Congress’s power to impose taxes.

A second, much more consequential question was whether, if the mandate were ruled unconstitutional, the entire law — including popular protections for people with pre-existing medical conditions, subsidies to help people afford health coverage and other measures — had to fall. Judge O’Connor ruled that it did, saying that both Congress and the Obama administration considered the mandate inextricably linked with the rest of the law when it was passed in 2010.

The ruling essentially asked him to justify such a sweeping decision, requesting that he “employ a finer-toothed comb.”

For example, their ruling noted, one provision requires certain chain restaurants to post calorie counts for menu items, while another sets certain bars for convicting someone of health care fraud.

“Without more detailed analysis from the district court opinion,” the ruling said, “it is unclear how provisions like these — which certainly do not directly regulate the health insurance marketplace — were intended to work ‘together’ with the individual mandate.”

A longstanding legal doctrine called “severability” holds that when a court excises one provision of a statute, it should leave the rest of the law in place unless Congress explicitly stated that the statute could not survive without that provision. But legal experts on both sides of previous A.C.A. battles said that Judge O’Connor’s reasoning was badly flawed in striking down the entire health care law based on how the penalty provision became moot by the 2017 tax legislation.

In Wednesday’s ruling, the appellate judges also asked Judge O’Connor to consider a proposal that the Justice Department, which had sided with the states seeking to overturn the law, quietly put forth earlier this year. It recommended blocking only the parts of the law found to harm those states and the other plaintiffs, or to declare the law unconstitutional only in the plaintiff states. The states are Texas and 17 others with Republican governors or attorneys general, and two self-employed men in Texas who say the law still requires them to purchase health insurance that they otherwise would not buy, even though there is no longer a penalty for going uninsured. 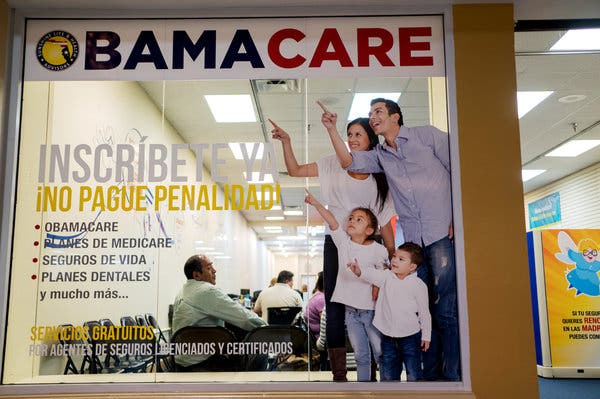 A storefront of Sunshine Health and Life Advisors, a Florida insurance enrollment company, in Miami in November 2016.Credit…Angel Valentin for The New York Time

While not hinting one way or another what they thought about the severability question, the appellate judges noted the huge stakes involved.

“It may still be that none of the A.C.A. is severable from the individual mandate, even after this inquiry is concluded,” the two judges in the majority wrote. “But it is no small thing for unelected, life-tenured judges to declare duly enacted legislation passed by the elected representatives of the American people unconstitutional.”

Importantly, the ruling also asked Judge O’Connor to consider the intent of Congress when it zeroed out the mandate’s tax penalty in 2017: Did the lawmakers consider the insurance mandate inseparable from the rest of the law? At oral arguments on the appeal in July, the intervening defendants pointed to statements from members of Congress at the time indicating they wanted the rest of the law to remain intact.

On Wednesday night, Senator Lamar Alexander, Republican of Tennessee, loudly joined that argument. “I am not aware of a single senator who said they were voting to repeal Obamacare when they voted to eliminate the individual mandate penalty” as part of the 2017 tax overhaul, Mr. Alexander said in a statement.

Ken Paxton, the Texas attorney general who led the state plaintiffs in the case, applauded the decision and promised to continue fighting.

“We look forward to the opportunity to further demonstrate that Congress made the individual mandate the centerpiece of Obamacare and the rest of the law cannot stand without it,” he said in a statement.

The Trump administration has yet to respond to the ruling. It took the highly unusual step of refusing to defend the law after the case was brought against the government early last year and sided with the plaintiffs — at first only partially, but after the lower court ruling invalidated the law, entirely.

That left the 21 intervening states, all with Democratic attorneys general, to appeal the lawsuit, joined by the House of Representatives after Democrats won control last fall. They maintained that the individual mandate remained constitutional, but even if the courts disagreed, they said, the rest of the law could remain.

Although the law has significantly reduced the ranks of the uninsured, it has not lived up to its promise for some groups who were supposed to benefit, particularly middle-class people who don’t get insurance through a job, earn too much to qualify for the premium subsidies the law provides and often struggle to afford coverage.

For now, the law stands and the government continues to enforce it. The Trump administration did not object and said it would continue to enforce the law until all appeals were exhausted.

Health care is playing a pivotal role in the Democratic presidential primary race, with some candidates calling for improving the Affordable Care Act, others aiming to replace it with a government-run system, but all planning to criticize Mr. Trump for supporting the lawsuit should they win their party’s nomination.

Abbe R. Gluck, a health care expert at Yale Law School who supports the health law, said she was heartened that the appeals panel “recognized some of the glaring weaknesses in the lower court opinion,” but frustrated that the law’s future would remain uncertain, and for now, in the hands of a lower-court judge who already tried to overturn it.

“The result is that the uncertainty about the A.C.A.’s future will continue,” she said, “and continue to harm the health care markets, and that we are highly unlikely to get any final ruling on the A.C.A.’s fate until after the 2020 election.”

Abby Goodnough is a national health care correspondent. She has also served as bureau chief in Miami and Boston, and covered education and politics in New York City. She joined The Times in 1993. @abbygoodnough